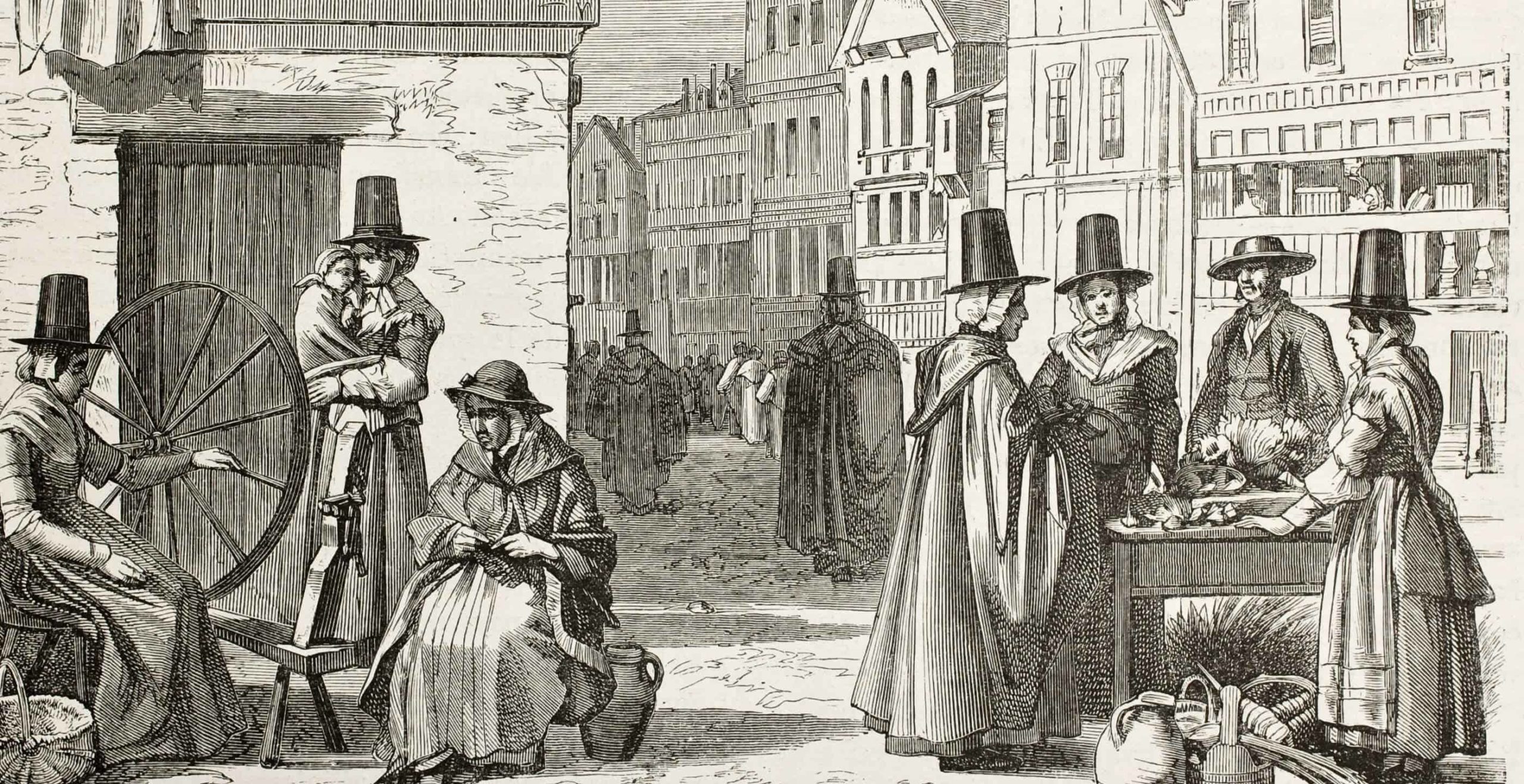 One of the difficulties researchers with Welsh ancestry face is pinpointing the location of ancestors possessing surnames. Authorities John and Sheila Rowlands have taken some of the difficulty out of this process in the updated version of their book, The Surnames of Wales, by showing the greatest areas of concentration where such surnames do and do not proliferate. To illustrate, we excerpted the Rowlands’ findings for 17 common Welsh surnames, which the authors believe display the variations in the levels of occurrence and range of distribution they encountered. (The figures referred to in each description below can be found in The Surnames of Wales.)

JONES: (See Fig. 5-3) As one might expect – both by reputation and by casual observance –  this surname is by far the most common one in Wales, and in the early part of the nineteenth century (1813-37) was held by 13.84% of the population. However, this overall percentage, whilst high even by Welsh standards, masks the fact that in parts of north Wales the incidence can be in excess of 30%, while in parts of south Wales it can be as low as 1% .

It can be seen from Fig. 5-3 that, apart from north Wales, this surname is also strong in mid-Cardiganshire, while the lowest concentrations are to be found in Pembrokeshire, Gower and the Vale of Glamorgan . Along the English border the percentage occurrence is quite high, ranging progressively upwards from Monmouthshire (Skenfrith, 6.75%) to Denbighshire (Chirk, 20.99%). These figures would lead one to expect the  name to have a significant presence in the border counties within England, and so it proves. Guppy, for example, identified occurrences of the surname within these counties as follows: Gloucestershire, 1.05%; Herefordshire, 3.50%; Shropshire 5.00%;and Cheshire, 0.81%. These percentages may be compared with the incidence he found for the surname Smith in those same counties, namely: 2.70%, 1.60%, 0.50% and 0.56% respectively.

WILLIAMS: (See Fig. 5-4) This surname also has its greatest areas of concentrations in north  Wales, and on the Llyn peninsula of Caernarfonshire in particular. The surname also has a significant presence in south-east Wales centered on south Breconshire. The average incidence of the surname over the whole of Wales is 8.91%, within the range of 3% to 22%. The surnames Hughes (2.98%) and Owen (2.08%) exhibit broadly the same distribution pattern but their main areas of concentration are in north Wales.

DAVIES: (See Fig. 5-5) This name has an average incidence across Wales of 7.09%. The heartland of the name is mid Cardiganshire but it takes in much of the remainder of Cardiganshire as well as large areas of Breconshire and north Carmarthenshire. Outside this heartland the areas of least incidence are the anglicised areas of south Wales and, in direct contrast, the intensely Welsh areas of north Wales.

THOMAS: (See Fig. 5-6) This is very much a surname of south Wales where it has a general incidence in the range 5% to 13%. The only exception to this is Monmouthshire where the incidence is generally well below 5%. The average incidence across Wales is 5.70%.

EDWARDS: (Fig. 5-7) This surname is typical of a number of surnames which are found throughout Wales with few, if any, areas of concentration. It has an average incidence across Wales of 1.97%. Other names exhibiting a similar distribution are Griffiths (2.58%), Morris (1.26%) and Richards (1.26%).

ROBERTS: (Fig. 5-8) This figure clearly illustrates how much a name of north Wales it is. Concentrations of 10-15% throughout much of Caernarfonshire, Denbighshire and Merionethshire are in marked contrast to levels below 0.7% in much of south Wales. The average incidence across Wales is 3.69%. Other surnames with similar distributions are: Humphreys (0.45%) and Ellis (0.44%).

PRICE: (See Fig. 5-10) The distribution of this surname is typical of the many ap names – such as Powell, Probert, Prosser, Prothero/ Prydderch, etc – which are prominent on the border between mid-Wales and the English areas of Herefordshire and south Shropshire. The surname Price is, however, found in significantly greater concentrations than is the case with these other names. The overall incidence is 1.35% and it has its greatest incidence on the Breconshire/ Radnorshire border.

DAVID: (See Fig. 5-11) The survival of the given name David as a surname, without  transition into the more  familiar form Davies is largely confined to Carmarthenshire, south Cardiganshire, north Pembrokeshire and the Vale of Glamorgan It has an overall incidence of .099% . The name John (0.86%) also survives as a surname without transition into Jones in almost exactly the same area.

HOPKINS: (See Fig . 5-12) A surname with a significant incidence only in Glamorgan and the Usk area of Monmouthshire. Elsewhere it occurs only spasmodically and in generally low concentrations. It has an average incidence of 0.32%. The occurrence of the name is typical of those surnames which have a presence which is greater than local, but which is more local than regional. Other surnames showing this type of  distribution/concentration are Mathias (Pembrokeshire), Pierce (Denbighshire), Foulkes (Denbighshire/Flintshire), Hamer (Montgomeryshire/Radnorshire), Probert (Radnorshire/Breconshire) and Prosser (Breconshire/Radnor-shire/Monmouthshire).

LLEWELYN: (See Fig. 5-13) A surname which is largely confined to the southernmost part of south Wales and in particular Pembrokeshire and Glamorgan. It has an average incidence of. 37 %.

PUGH: (See Fig. 5- 1 4) This surname is prominent within the central area of Wales but is absent from peripheral areas such as Anglesey, western Caernarfonshire, Pembrokeshire and the coastal hundreds of Glamorgan. It has an overall incidence of 0.39%. The distribution is also exhibited by the surnames Rogers (0.29%) and Vaughan (0.27%).

OLIVER:  (See  Fig. 5-16) The  distribution of  the surname Oliver exhibits a clearly identifiable pattern for which we have no ready explanation. That it should be found consistently along a diagonal line across Wales, stretching from  Pembrokeshire in the south-west to the southernmost part of Denbighshire in the north-east, does not reflect any obvious social, cultural or religious axis. It does not, for example, reflect a tendency towards surviving forms of nonconformity which have their roots in early Puritanism (such as the Baptists and Independents), whose adherents might have been influenced by Oliver Cromwell at the time when settled surnames were beginning to be taken. Certainly for much of the area in which the surname exists, Methodism (mainly Calvinistic) with its roots in the Established Church – for whose adherents  the convictions and actions of such as Oliver Cromwell would have been total anathema – was the predominant denomination by the early nineteenth century.

MEREDITH: (See Fig. 5-17) The distribution of the surname Meredith, like that of the surname Oliver, has a clearly defined pattern for which we have no ready explanation. As can be seen from Fig. 5-17, it is found along an axis stretching from north-west Merionethshire to south-east Monmouthshire. However, unlike the surname Oliver which occurs with a fairly even incidence along its axis, the surname Meredith  has a significant area of concentration in south Radnorshire (greater than 2%), with the level of incidence decaying as one moves outwards (in both directions) along the axis. This would tend to suggest an axis of migration and, while movement towards the developing industrial areas of Monmouthshire would explain the southern part of the axis, there are no immediately obvious geographical or economic characteristics to explain any movement in a  north-western direction. Indeed, it is_ the symmetry  of the overall axis about the point of concentration which is most puzzling, albeit that it is a characteristic shared with other surnames such as Jarman (centred on north Radnorshire) and Mills (south Montgomeryshire). However, the incidence of the name in adjacent parts of England is  a characteristic which invites special consideration; this is touched upon in Chapter 6 where we discuss the work of H.B. Guppy. It is also considered in much greater detail in Chapter 1l.

GWYNNE/WYNN: (See Fig. 5-18) These two versions of the name commonly given to those who were fair of hair or complexion would normally be taken together if it were not for their almost totally separate regional occurrence. It can be seen that, whereas the surname Gwynne (0.07%) is found fairly consistently across south Wales, it is rarely found to the north  of a line through the mid-Wales hundreds of Ilar (Cardiganshire), Rhaeadr and Cefnllys (both Radnorshire) . Wynne (0.11%) on the other hand exhibits the opposite characteristic in relation to that same line.

For more information on The Surnames of Wales and other excellent reference works by John and Sheila Rowlands, please see this page on our web site.

2 thoughts on “Findings on specific Welsh surnames from John and Sheila Rowlands’ The Surnames of Wales. Updated and Expanded Edition”