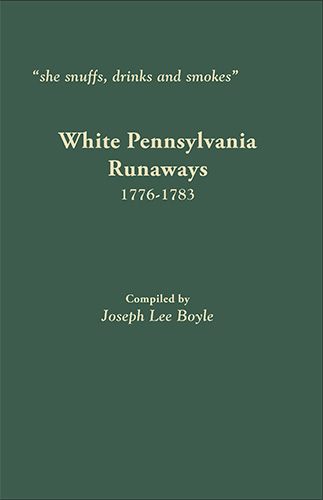 The demand for labor in the colonial period was such that by 1775 an estimated 350,000 to 500,000 indentured persons had been transported to America. Given the scale of indentured servitude, runaway servants were not an uncommon phenomenon in the 18th century.

Since the Continental Army and the militia of the various states suffered from a chronic shortage of manpower, many servants and apprentices served. As Joseph J. Ellis recently wrote in The Quartet: Orchestrating the Second American Revolution, 1783-1789, “The hard core of the Continental Army was eventually comprised of misfitsâ€”indentured servants, recently arrived immigrants, emancipated slaves, unemployed artisans.”

This work includes individuals with Pennsylvania connections who did not run away in that state. For example, though he broke out of jail in Gloucester, New Jersey, Henry Lane is included in this collection as he “served part of his apprenticeship” in Philadelphia. William Pike was one of the “Philadelphia Exiles” who had been sent as prisoners to Winchester, Virginia in 1777. He escaped from there in February 1778, and as a native of Pennsylvania is included herein. Fifteen-year-old Joseph Paterson left his master in Burlington County in June 1778, and William Evans considered it “likely he will go towards Lancaster in Pennsylvania, as he has a brother that way.”

This compilation lists only white men and women, though blacks in the same ad are included.