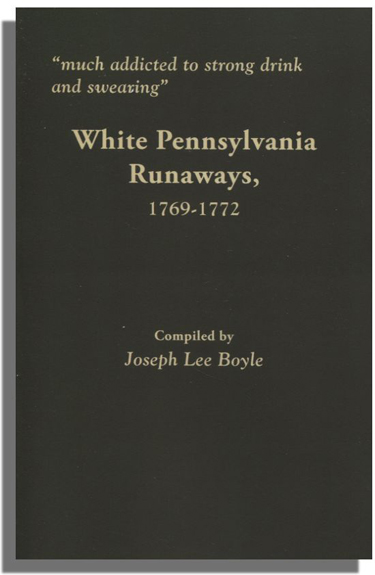 “Much addicted to strong drink and swearing”: White Pennsylvania Runaways, 1769-1772

Runaway servants were not an uncommon phenomenon in the 18th century. One source estimates that between 20-25% of indentured servants fled their masters. From the genealogist’s standpoint, this presents a methodological problem since it was in the runaway’s best interest to conceal his/her identity after making a successful getaway. In other words, even if the runaway kept the same name, it is quite likely that the link to his original residence in America and to his country of origin was lost–lost, that is, unless his/her identity is uncovered in the thousands of runaway ads placed in colonial newspapers by the disgruntled “owners.” And this is precisely where the research and publications of Joseph Lee Boyle come in.

This is the eighth collection of runaway servant ads for the Chesapeake region compiled by Joseph Lee Boyle, and it covers Pennsylvania ads for the years 1769-1772. One such Pennsylvania runaway, Hopkins Drive, ran away thirty-three times. Another, Edward Farl, was described as “a gallows-looking lying drunken fellow.” Female runaways included Elizabeth Eckrine, “a thick clumsy ill-tongued slut,” and Jennet Scott, who “was very fond of all sorts of men.”

As Mr. Boyle points out in his very helpful introduction, Pennsylvania received one-tenth of all male indentured servants from the 1720s through the 1740s, and about one-fifth of the women in that period. According to one authority, over 67,000 German immigrants arrived at the busy port of Philadelphia from 1720 through 1760, at least half of whom were servants. Mr. Boyle’s transcription of the runaway ads is taken from twenty-four different colonial newspapers, including papers from Pennsylvania, Massachusetts, Connecticut, Rhode Island, Maryland, and New York, as well as one German-language tabloid. The ads provide valuable demographic information on more than 2,500 additional individuals, with name, age, sex, height, place of origin, clothing, occupation, speech, physical imperfections, and sometimes personal vignettes and even poems.

For this compilation the author has listed only white male and female runaways; however, for those ads where white and black runaways are listed together, blacks are so identified in the index at the back of the volume.

Be the first to review ““Much addicted to strong drink and swearing”: White Pennsylvania Runaways, 1769-1772” Cancel reply
Search Our Catalog
show blocks helper